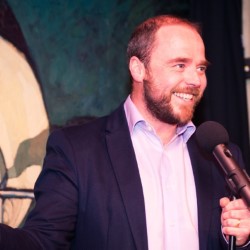 After millions of downloads and five spin off radio series for the BBC, the original and best comedy podcast returns for 2015. A combination of stand-up, songs, sketches and chat from the absolute best of this year's Fringe hosted by Richard Melvin. Previous podcast guests include Frankie Boyle, Kevin Bridges, Sarah Millican, Miles Jupp, Lee Mack and many more... Come and see the show being recorded live at The Stand before it's downloaded all over the world.