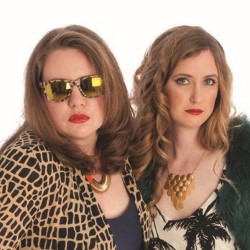 Funny Women Variety Award winners Revan and Fennell make their observational, character-driven and fast-paced Edinburgh debut. Best New Sketch Act, So You Think That's Funny? finalists and London SketchFest Best Show finalists. They may not be particularly satirical, edgy or off the wall... but they went to drama school and know how to warm up their voices. Sort of. 'Terrific' (HuffingtonPost.co.uk). 'They put the boys to shame' (Scotsman). 'Reminiscent of Smack the Pony ... Comedic genius' (RemoteGoat.com).

Observational and character-driven in style, sketches are often inspired by social situations and popular culture, ranging from an unorthodox wedding speech to a BBC EastEnders parody. Scattered throughout the sketches are glimpses into the world of Revan and Fennell - two conflicting performers trying to make their mark in entertainment, and one with an ego to rival the size of the industry.

Having met at East 15 Acting School, Revan and Fennell have written, directed and produced their own work since 2012. Winners of the 2013 Funny Women Variety Award at the Leicester Square Theatre, they were also finalists in the 2013 Best New Sketch Act So You Think That's Funny? competition. They recently reached the semi-finals of the 2015 Golden Jester Comedy Competition, which are due to take place in London in September.