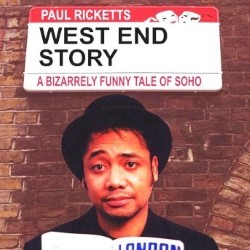 Return of acclaimed and libellously funny storytelling show on how to find outrageous nightly adventure on a budget of £5. Set in 1990s Soho, London, it's storytelling about storytelling. Using it to get a social life by creating scenarios in illegal drinking-dens beneath sex shops. The bigger the story you tell, the more people - like international music legends and Tony Blair - want to believe it. 'Beguiling storytelling' **** (Chortle.co.uk). 'Go hear his story' **** (ThreeWeeks). ww.Pay-What-You-Want.info

Award winning stand-up Paul Ricketts garnered great reviews at last year's Fringe with West End Story, a hilarious and outrageous tale of life in Soho in the 1990s. The show went on to have sold out performances at London's Etcetera Theatre and at the Bath Comedy Festival.

Paul is returning with his show to Edinburgh but this time he'll be performing in the perfect urban venue space - the top deck of a bus!
West End Story is a comedy storytelling show featuring romance, bizarre escapades and a philosophy of life - explaining how to have outrageous nightly adventure on a budget of £5. It's a storytelling show about storytelling, creating scenarios to create a social life - which lead to a situation involving a famous flamenco guitarist and a former Prime Minister. The show is a celebration of London - with it's mix of opportunity and unaffordable housing - and it works because it is extraordinary material and entirely true.
Paul says: "Last year in Edinburgh, every day I had a fantastic time recreating the events of show, using the same little white lie while inviting prospective audience members to join me at the show. I wanted them to surrender to the potential pleasures of the random experience and mirror their attendance of my show with the events that happened in Soho."
Paul's previous Edinburgh Fringe shows have been highly rated. In 2009, Cutter's Choice, a political and personal look at black hairstyles, didn't get a single Edinburgh Fringe review but went on to tour London schools as well as being performed at The Hen & Chickens Theatre, Theatro Technis, Tristan Bates Theatre in London, Leicester and Brighton Fringe Festivals - winning the Fringe Guru Editor's Choice Award 2010. His next Edinburgh show Kiss The Badge, Fly The Flag! dealt with football and English identity, received the 'Must See' award from The Stage, five stars from Remotegoat.co.uk and four stars from Three Weeks. This show was performed at Cambridge University's 'Festival of Ideas' and a revised version did a short run at the Leicester Square Theatre. In 2012, 'Ironic Infinity', a straight stand-up show was also very well received, gaining 4 stars from Chortle and Broadway Baby.