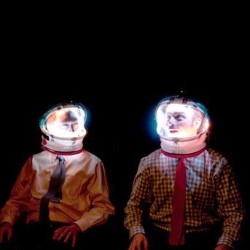 An hilarious homage to classic sci-fi and literature, Moby Alpha is the story of a mad captain's quest for revenge on the energy cloud that took his leg. More simply, Moby Alpha is Moby-Dick in space. But funny. The show is performed in a dark theatre with the only light emanating from the duo's custom-built LED space helmets, creating a unique, otherworldly aesthetic. Written and performed by Charles, the Seattle comedy duo that Centerstage Chicago called 'absolutely brilliant'. 'A clever satire that manages to prank sci-fi and classical culture in the same trip' **** (Edmonton Sun).

A homage to classic sci-fi and literature, Moby Alpha tells the story of a mad captain's quest for revenge on the amorphous energy cloud that temporarily took his leg. More simply, Moby Alpha is a comic Moby-Dick in space.

Moby Alpha is written and performed by the Seattle comedy duo 'Charles', aka Chuck Armstrong and Charlie Stockman, who play a dozen different characters in a universe populated by jaded cannibals, holographic spammers, melancholy computers, and of course, energy clouds. The show is staged entirely in the dark, with the only light emanating from custom-built, million colour LED space helmets, as Armstrong & Stockman switch from one character to another at the push of a button.

This futuristic adaptation of the Herman Melville classic has plays to packed houses and rave reviews wherever it goes.

Chuck Armstrong is a writer and comedian from Seattle, WA currently working in Los Angeles. He and his writing partner, Charlie Stockman, compose the two-man sketch comedy duo Charles, winners of "Best Writing" and "Best Sketch Comedy" at the 2012 Los Angeles Comedy Festival. Outside the group, Chuck was a staff writer for Stanford University's humour magazine The Chaparral, and has worked as a contributing writer for Splitsider and The Onion.

Charlie Stockman is a writer/performer working in Los Angeles. He and his writing partner, Chuck Armstrong, compose the sketch duo Charles, who have performed throughout the US and Canada including annual appearances at the San Francisco, Chicago, and Toronto sketch comedy festivals. Outside the group, Charlie was editor-in-chief of the Stanford University humour magazine The Chapparral, and has contributed humour pieces to McSweeney's and Splitsider.