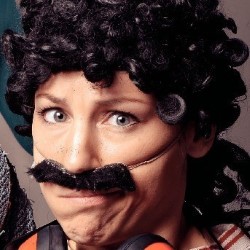 Marny Godden is one third of cult comedy group The Grandees (***** ThreeWeeks) and has brought to life a collection of very colourful characters. In this, her debut solo show, she mixes clowning and narrative storytelling to take the audience on an uplifting, fun-packed adventure. Meet the Little Wula, a hirsute 15-year-old boy; Mick, a kipper-loving wheeler dealer; a dog-riding girl with a never-ending smile; a hoover lady; and Wilmot Brown, the finest actor in London town. Prepare yourself to feel exhilarated, giddy and totally uplifted.

Marny Godden is the sassiest third of hugely popular, cult sketch group The Grandees. Over the past few years they have won the hearts and minds of every oddball at the Fringe and gardened about a million four and five star reviews.

This year Marny is making her debut solo show (part character comedy, part clown, part scripted and part improvised) where all the colourful characters she has brought to life over the years, take a turn. Expect an uplifting, giddy, fun-packed interactive adventure which will transport you back to childhood.

You will get to meet Mick, a kipper-loving wheeler dealer; a dog-riding girl with a never-ending smile; a hoover lady; Wilmot Brown, the finest actor in London town and Mo Moses - a bearded, clog wearing prophet - who has something very important to tell you all...

Marny fell from space as a seed. Landing in a fertile patch of comedy she germinated quickly and grew strong. Raised by wild clowns on the mean streets of London, she honed her squirrel skills and earned her comedy wings. Forming one third of the comedy hit triangle the Grandees she has carved reality into tasty cake sized pieces...

OR: if you insist on sticking with the facts, she trained at Webber Douglas Academy Of Dramatic Art, co-founded The Grandees in 2008 and performed regularly in theatre since, with her most recent roles including Joan of Arc and Nefertari in Umbrage Swain & The Magical Diamond of Ramtutiti at The Hen And Chickens Theatre. Her recent TV roles include playing Vera in The Day They Came To Suck Out Our Brains and she is in James Wren's new film The Man You Are Not starring Joanna Lumley.