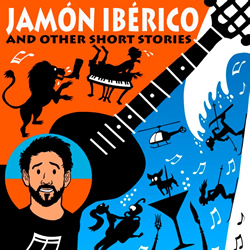 Hot from it's London premiere, Luke Courtier (Finalist in the 2015 Musical Comedy Awards and the Amused Moose Laugh Off 2015) brings his new show to this years Edinburgh Festival.

From the perils of adequate dog sizing to the travails of a backstreet boy picking up the pieces in Malibu, and a brush with death in Knightsbridge, Jamon Iberico is an action packed hour of contemporaneous musical comedy short stories.

Luke Courtier trained at RADA and has worked extensively in theatre before turning his hand to comedy. His theatre credits include Peter Hall's Henry IV Parts 1 and 2 and the Theatre Royal Bath, As you Like It at the West Yorkshire Playhouse, Billy Budd at Southwark Playhouse and A Dashing Fellow at the New Diorama.