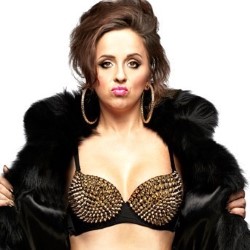 Fresh, hilarious and brilliant! Another signature party with jokes from Luisa Omielan, following her unprecedentedly successful debut stand-up show, What Would Beyoncé Do?! An empowering manifesto regarding sex, mental health and body image. It's back for a second year for three nights only. Come and see why Luisa keeps getting sell-out runs, you'll have the time of your life. #AmIRightLadies. ***** (Chortle.co.uk). 'Omielan is a refreshing comic voice, doing something that no one else is doing... there's no doubt that she will become the megastar she already acts like one day very soon' (Independent).

After an unforgettable year, Luisa Omielan triumphantly returns to Edinburgh with her second hour Am I Right Ladies?! performed over three nights at the Assembly George Square Theatre.

The show, which focuses on the ways in which society gets in the way of you feeling good about yourself, be it in your career, relationship or your own skin, is the follow up to Luisa's unprecedentedly successful debut stand up show, What Would Beyoncé Do?! which bolted Luisa into the spotlight last year.

Having arrived home after an enormously successful stint at the Melbourne Comedy Festival, in which her performance at the Gala went viral with over 9.5million views and later earned her a Barry Award nomination, Omielan's summer UK tour is culminating with this unmissable run at the Fringe.

London-based Omielan is a stand up, improv and actress who has been performing on the London circuit since 2008. A voracious worker, Omielan has performed 11 shows at the Edinburgh Fringe in the past five years. Having sold out two Edinburgh seasons, seven runs at the Soho Theatre, plus sell out shows in LA, New York, Toronto, Montreal's Just For Laughs and Singapore, 2014 also included her first comedy pilot for BBC Radio 2, Luisa's Omielan's Party. In March 2015, Omielan signed a book deal based on her breakout debut stand up show, What Would Beyoncé do?