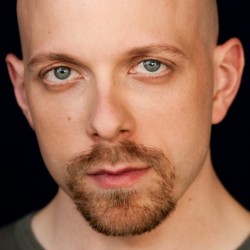 London-based Italian comedian. Hilariously crafted material with plenty of witty improvisation and bizarre observational humour. 'We have discovered brand new comedy talent in Luca Cupani' (Copstick, Scotsman). 'Most definitely one to look out for' (BroadwayBaby.com). Pay-What-You-Want.info

What happens when an Italian in his late 30s discovers that his only talent is to be funny?

He moves to the UK and decides to become a comedian. After surviving last year his first Edinburgh show (Free Fall), he's now back to the Fringe!

Do you want to know how many prayers it takes to promote a complete stranger from Purgatory to Paradise? (Luca is a Catholic, for his sins) Or how it feels to be the appointed photographer of a corpse? Or what inspirational life lessons you can learn from your own penis? Then look no further: Luca's imagination is in free fall... and it keeps falling!