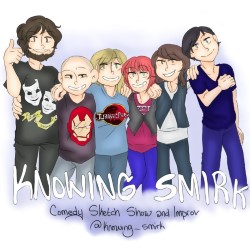 Knowing Smirk is an established Cheltenham-based sketch comedy group, as well as comedy improvisation. If you're brave enough to join in, you'll get a badge and no diseases. Follow Knowing Smirk on Twitter @knowing_smirk, and if you can't make it to the show, tweet your suggestions and they'll be included!