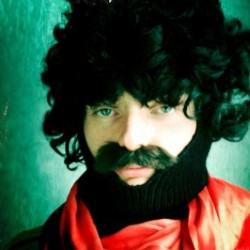 'Seems to be the genius among the young ones. The best show in town' (Harry Hill's One to Watch). 'Gloriously odd' (Chortle.co.uk). 'Gloriously silly' (Time Out). I still do Parky interviews on the loo. After this, you'll believe that's probably true. I have 48 words left. Shame about Terry Pratchett. He seemed like a nice man. Leonard Nimoy. Another one. Says here he had a pilot's license. That would've been fun. Maybe somewhere Leonard Nimoy is taking Terry Pratchett for a spin in his holy glider. And Terry's writing it all down.