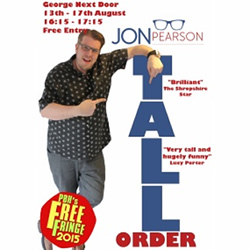 The hugely funny Jon Pearson, brings a work in progress hour of comedy fun to Edinburgh for 2015 for 5 nights only! Jon is a big man, but every man was small once... Right? Join Jon as he tells this hilarious tale of what it's like to be overgrown at every stage of life.