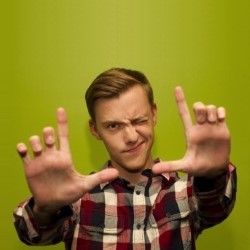 Jon brings his one man show to Edinburgh after becoming a YouTube sensation with his musical videos Harry Potter in 99 Seconds and the 46 million viewed Disney Parody After Ever After. His YouTube channel has over 2.8 million subscribers and he famously was nearly successful in the online Glee auditions. Jon's show brings a mix of technology, music and comedy with his creative mash-ups and parodies of well-loved songs.