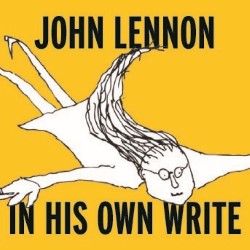 In 1964 at the height of Beatle-mania John Lennon released his first book In His Own Write. A zany, hilarious and sophisticated collection of stories, scenes and poems, it was beloved by critics and audiences alike providing a fascinating insight into the mind of one of the world's most famous wordsmiths. Baldynoggin Productions are delighted to present the entire book on stage for the first time and completely free as part of PBH's Free Fringe.

Baldynoggin Productions are proud to present:

John Lennon 'In His Own Write'

For the first time ever In His Own Write will be performed onstage- completely unabridged and totally FREE. Each poem, scene and story from the book brought to life on stage in the order they originally appeared

"As far as I'm conceived this correction of short writty is the most wonderfoul larf I've ever ready". John Lennon

In 1964 at the height of Beatle-mania John Lennon published his first book, 'In His Own Write.' An intricate, zany and sophisticated collection of poems, scenes stories and illustrations, it provided a fascinating glimpse into the mind of one of the worlds greatest wordsmiths. The book was a huge success with audiences and critics alike selling over 600,000 copies in the UK alone. 2014 marked the 50th anniversary and it's re-appraisal half a century later remained universally positive.

"The best books written by a pop star...they remain the only ones needed really" The Guardian