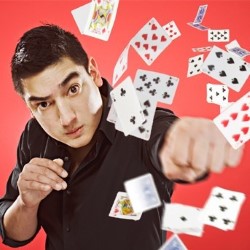 Back due to popular demand, multi award-winning comedian Javier Jarquin returns to the Edinburgh Festival Fringe with Card Ninja, a riotous and dazzling display of comedy and card stunts. Following his journey from mild mannered card player to silent assassin using playing cards as weapons, Card Ninja is a one-man comedy show with upbeat humour and smooth audience interaction for anyone who's ever wanted to be a little bit Ninja.