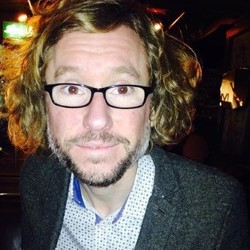 'A thoroughly enjoyable and funny experience. Thank you, Mr James Christopher ... for making the annual pilgrimage to Edinburgh and for making me laugh, repeatedly ... The instant connection he'd established with the audience persisted, and they were with him throughout' **** (GiggleBeats.co.uk). 'This is a genial man with an almost constant smile who recounts the bizarre in recognisable situations ... He cites Daniel Kitson as an influence and you certainly can see touches of this in both his persona and storytelling ability, which seems gentle but subtly nudges to the quite dark' (BroadwayBaby.com).

Hello. I'm James Christopher and I'm writing to tell you about my Annual Cry For Help, and hopefully, enlist your help.

This year I will be exploring the performer / audience dynamic. I will attempt to endear myself to the crowd with intelligent and tightly honed routines about politics, popular culture, turning vegetarian, etc - all peppered with my trademark one-liners. Furthermore, my 'cry for help' will extend to audience members, who I'll be enlisting for sound effects and lighting changes (via various torches I will provide. It's Free Fringe after all!)

Being liked is a typically human urge, though perhaps one that performers feel more strongly than most. More specifically comedians - who crave the spontaneous approval of raucous laughter, all the while the centre of attention. So what happens when two comedians are in a relationship? I have the answer!

It's my sixth consecutive solo show, and I've started to notice structural patterns emerging in my shows. Short, sharp jokes and one-liners at the top of the show, building to longer anecdotes and observations. I believe the material has improved year-upon-year, and it becomes possible to say more honest, personal things and take greater risks. Nevertheless, I felt an urge to do something different in terms of the layout of the show.

I've accumulated some nice reviews over the years, though many of them seem to mention how 'nice' I am. This is a strangely irksome compliment - as a writer, I want people to find my ideas challenging, surprising, even disturbing, whilst hopefully being relatable. My comedian partner is perceived as being a little more blunt and forthright than I am; so when she accused me of being "too nice" late last year, there seemed an obvious solution. We must write the most offensive, alienating sketch show in the world. We've called it The Walk Out Show.

My previous shows have played out like most Fringe stand-up shows - build an atmosphere of bonhomie, and end on a sense of unity and celebration with the crowd. We're going to subvert the norm by trying to get them to leave. So my last cry for help will be to my partner Maxie Wade, as we attempt to reverse six years of pandering to crowds!