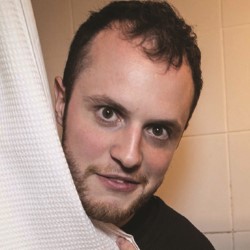 It's the debut hour of Jack Barry, (James Acaster's tour support and alumnus of Comedy Zone, Comedy Reserve) and it's time for you to watch him. Unless you're a square, in which case there's probably a beige party in beigeville that you could go to instead. Losers. 'An inventive flourish behind his likeable banter... A distinctive wit that should make him one to watch' (Steve Bennett, Chortle.co.uk). 'Instantly likeable' (ThreeWeeks). 'A pleasing, assured presence' (Fest). 'One to watch out for in the future' (BroadwayBaby.com).

Part-time comedian and fluent Chinese speaker Jack Barry returns to the Edinburgh Festival Fringe to debut his first hour; This Title Came to Me in a Dream. One half of popular sketch act Twins and alumnus of the Comedy Reserve and Comedy Zone, Jack is bringing his first solo contribution to the Pleasance Attic.

Jack's day job running Twitter and Facebook for a well-known fast food chain has forced him to interact with many pockets of British society and he finds brilliant humour in the exchanges between himself and the public. Bringing in his own funny anecdotes, Barry is able to make fun of his own stupidity and not just that of others in a way that makes him an incredibly likeable performer.

As well as demonstrating the struggles of a man with two first names, Jack writes and performs as one half of the acclaimed sketch duo Twins who have been produced by the Invisible Dot and this year by Hat Trick Productions.

Jack is establishing himself on the London circuit, regularly performing at top comedy nights Knock2Bag, Up the Creek, Glee Club and the Comedy Store. Jack is also a resident act at Pappy's New Material Night and a regular act at the Invisible Dot.

Jack has performed as part of BBC Comedy Presents at the Edinburgh Festival (2012) in the BBC Comedy Tent and as part of the Invisible Dot's New Wave at the Edinburgh Festival (2013, 2014). He was also selected to be part of the prestigious Comedy Reserve (2013) and Comedy Zone (2014), which have produced some of the UK's best stand-ups (alumni including Harry Hill, Ross Noble, Stewart Lee).