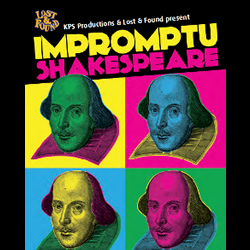 Returning after a successful premiere in 2013. Bursting with love, poetry, comedy, tragedy, soliloquies, power struggles, mistaken identity and the supernatural, Impromptu Shakespeare creates an entirely new and unique play, in the style of Shakespeare, and based entirely on suggestions literally thrown at them (on ping pong balls) by the audience.

Join some of the UK's most exciting improvisers for 40 minutes of riotous fun in an ingenious family friendly show (12+) that will delight Shakespeare aficionados and rookies alike. The Impromptu Shakespeare team have their tongues firmly in their cheeks and their feet planted in the works of The Bard.

Impromptu Shakespeare have been working together since their critically acclaimed 2013 Edinburgh Fringe debut. The show features a rolling cast of leading comic and theatrical improvisers and actors: