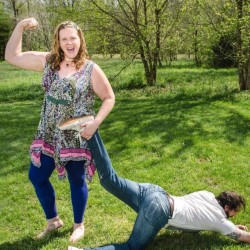 Samuel Johnson said 'He who makes a beast of himself gets rid of the pain of being a man'. She who makes a beast of herself gets dirty looks from children and constant questioning of her sexuality. Too masculine for makeup, yet biologically female enough to attract the sort of men who want to climb a woman like a jungle gym, Hailey has the (metaphorical, she swears) balls to speak her mind, and the comedic chops to make you laugh at things you probably desperately need to.