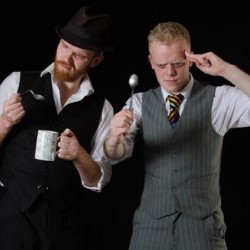 Magic performed on the following days in August 2015...

Award-winning tricksters Griffin and Jones, famous for their own brand of high energy comedy and slapdash magic, are likely to have you glued to your seats and rolling in the aisles in equal measure. Whether trying to flog you snake-oil, coerce you into playing one of their ridiculous games, or leaving you watching through your fingers in horror, these guys will leave you not only asking how they did it, but why... 'Bizarre, hilarious and anarchic' (MagicNight.co.uk). 'The banter and chemistry of a punk rock Morecambe and Wise' (Alex Watts, Blue Moon Revue).