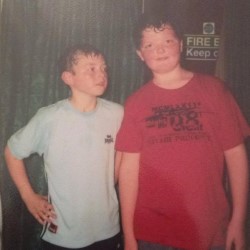 Tom Dowling and Kieran Ahern are current members of the Oxford Revue, but they're also bloody good kids. They hail from the red brick suburbs of Birmingham and couldn't be prouder of the second city they call home. In this innovative and immersive new show, filled with sketches, songs and monologues, they take you on a tour of the wonders that can be found hiding among their city's diverse populace. 'Unparalleled comic timing' (Cherwell). 'One big charmingly random adventure' (Oxford Student).

Tom Dowling and Kieran Ahern are not your average university comedians. They're also bloody Good Kids. Born and raised in the red brick suburbs of Birmingham they're at the Fringe to tell the world the story of the 'second city' they're fiercely proud to call home. Get to know the post-industrial playground where these two salt-of-the-earth boys were born and raised.

In this innovative and immersive new show you'll visit a city that's on the up, through the eyes of two best mates who knew the place in it's, shall we say, less fashionable years. They bring their potent mix of sketches, monologues, songs and straight-up bickering to The Attic Room, Just the Tonic @ The Mash House from the 6th to the 23rd August.