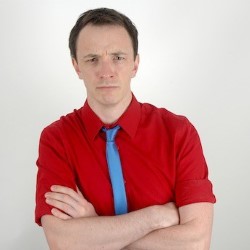 By the end of this show you will be able to pronounce Gearoid, rapidly exit any awkward conversation and even save a life ... if you so choose. This is Gearoid's second Edinburgh show. He has toured with the biggest names in Irish comedy, as well as supporting Joan Rivers and Sarah Millican in the UK. 'Intelligent, reflective comedy' (Irish Times). 'To be in Farrelly's audience is a joy' ***** (BroadwayBaby.com). 'Sharp and ruthless' **** (ThreeWeeks).