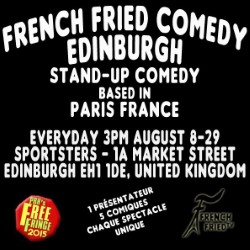 A showcase of the creme de la creme of the Paris scene! Be prepared for world-class English stand-up comedy in from comics based in Paris! With stories about metro systems, languages, administration, and life in general, you will be sure to laugh with us, no matter where you're from.