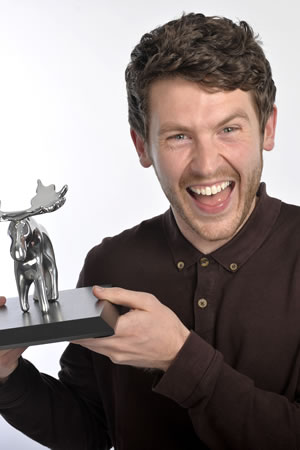 George Lewis, an up-and-coming stand-up comedian from Stockport, has been named as the winner of the 2015 Amused Moose Laugh Off final.

The competition, which has been running for a number of years now, features names such as Sarah Millican and Jack Whitehall amongst its hall of fame.

Lewis came out ahead of 8 other finalists in the audience and judges' voting, and so takes home the shiny moose trophy, which was this year presented by Christopher Richardson, founder of The Pleasance.

His winning set featured self-deprecating jokes about his relationship, alongside other carefully crafted gags. The sold-out final, hosted by Ian Smith, took place on Sunday afternoon (9th August) as part of the Edinburgh Festival Fringe. On accepting the trophy, the comedian thanked his family who were in the audience at The Symposium Hall gig for their support, and paid tribute to his fellow finalists.

Lewis will now perform as part of the Amused Moose Awards Showcase in London this Autumn, along with runners up Mo Gilligan and James Loveridge, plus the winner of the yet to be decided best-show-based Amused Moose Comedy Award.