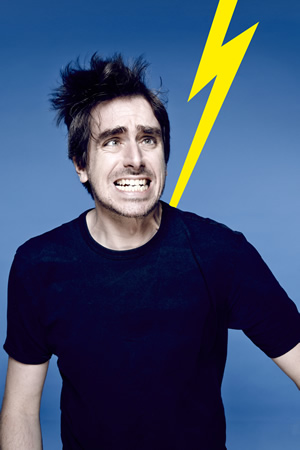 Darren Walsh is filled with puns. As he explains, if you see him in the street in Edinburgh you can ask for one. His answer to Question 2 below is pretty smart too...

I started in 2010 and I always knew my comedy career would have me filling stadiums. Just got a job driving a digger.

I do Edinburgh for the same reason I eat breakfast baguettes... To bacon through to the other side.

I walk around with a T-Shirt saying FREE PUN printed on it and I ask random people if they would like one, to which they give me a random subject, then I give them a pun. If they laugh, I hand them a flyer. If they don't laugh, I don't hand them a flyer.

I just calculated today that if I sell out every show, I'll break even.

Mary Poppins was handing out flyers for pigs to try and discourage them from urinating in the Edinburgh alleyways, but it wasn't working. I told her "Sue Pork-Alley for an agile piss stink 'n' axe Pee-Alley brochures!"

Unfortunately, most of the shows I want to see are on at the same time as my show, so I'll have to catch them at Soho Theatre later on in the year.

If I started listing my favourite comedians it will make my peers angry.
I mean, he's doing quite well in the States now, with that Life Stories programme, but people pick up on these things.

I don't want to bump into my Tip-ex again. Last time she blanked me.

I think I'm the tallest comedian at the Fringe, so if you don't laugh at least you can sit in amazement.