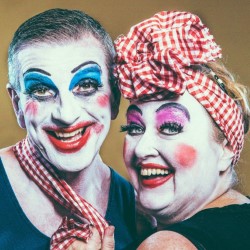 Prepare to laugh and be shocked. You can forget puppets, this is a hysterical, murderous, live action romp. Leave your sensitivities at the door and enjoy this wicked, adults only comedy inspired by burlesque, vaudeville and grotesque theatre. The Fabulous Punch and Judy Show is a viciously dark no-holds barred assault on masculinity and what it means to be an Australian male. You don't want to miss this ocker and violent cabaret.

Satirical, irreverent and viciously dark comedy from some of the most twisted, iconoclastic queens on the Sydney gay scene.

A two-time sensation of the Sydney Gay and Lesbian Mardi Gras Festival and a popular feature at Sydney's legendary Imperial Hotel (featured in Priscilla Queen of the Desert) see The Fabulous Punch and Judy Show outside Australia for the first time ever.

Based on the 1832 puppet show by Collier and Cruikshank - but without the puppets - this is a no holds barred comedy assault on modern masculinity with lashings of burlesque, vaudeville and grotesque theatre. That's the way to do it!

'If you like your Punch and Judy with a queer, satirical, scatological bent - and I DO mean bent! - then this is the Punch and Judy show for you. Don't say I didn't warn you!' - Bob Downe (aka Mark Trevorrow)

The Fabulous Punch and Judy Show is the brainchild of Australian cabaret performer and writer Brent Thorpe (Mr Punch). Previous shows include Too Old For TV his chronicle of gay life in Sydney and also the Sydney Ghost Tours (a walking tour of Sydney's historic areas) which have been attended by over 190,000 people since 2005. In 2013 he was the voice of Eurovision for SBS TV.