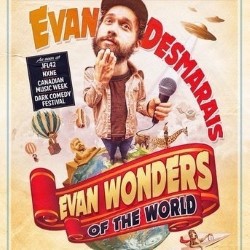 Evan Wonders of the World is a show that jumps into Evan Desmarais's head and tries to figure out what's wrong. A trip though the struggle of self confidence and ideas on life. Evan hilariously jumps around from space, politics and sexual orientation. Come see Evan's debut Edinburgh show.