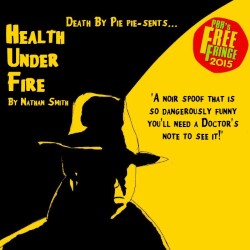 A noir spoof set in the 50s that is fast-paced, ridiculous and jam-packed with jokes. Think The Naked Gun meets The 39 Steps! A show you can watch two or three times and still discover new jokes! It's Manchester 1950, the NHS has only been active for two years. Arnold Grace has been sent to investigate the Royal Infirmary Hospital under allegations that pharmaceutical products are regularly going missing. As Grace digs deeper through the investigation he finds corruption, robbery, fraud and conjoined twins. The show is presented by Death By Pie, who specialise in theatrical comedy.