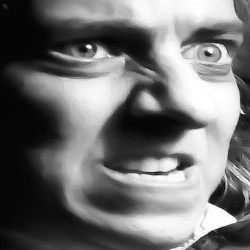 From the director of Red Bastard! Think it's a solo show? Think again. Private eye Butt Kapinski invites you to co-star in a film noir fantasia. This funny, filthy, fully interactive ride is riddled with sex, sin and subterfuge, and it's been tearing up North America! 'I can't remember when I've laughed so hard or so often' ***** (Calgary Herald). 'The riskiest show in town' (Edmonton Journal). Best of Fest: Edmonton, Calgary, Hollywood. Let's kick reality to the curb and play in a world of dark dreams and bad similes! Adults only. No seat is safe.

Think it's a solo show? Think again. Private eye Butt Kapinski invites you to co-star in a film noir murder mystery. Join Butt in a seedy world of sex, sin, shadows and subterfuge as you take the ride of a full-on interactive comedic experience. Kick reality to the curb! Play in a world of dark dreams and bad similes. ADULTS ONLY.

Get it? If not, watch this. Still don't get it? Get outta here.

Deanna Fleysher is a comedy artist, teacher and director devoted to interactive comedic experiences. She created Foreplay, an erotic improv comedy show that ran for a year at the People's Improv Theater in NY and was featured at the Chicago Improv Festival. She created, produced and starred in Kill Me Loudly: A Clown Noir and The Kapinski Private Eye Academy at the NY Clown Theatre Festival. She created the Naked Comedy Lab, a workshop for training in interactive comedy and clown/bouffon. She is the director and co-writer of Red Bastard, the internationally acclaimed bouffon show. Currently, she tours her award-winning solo show BUTT KAPINSKI and teaches Naked Comedy labs in Los Angeles and around North America.