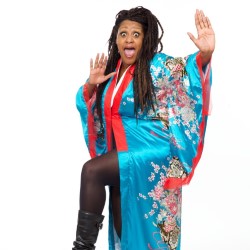 International Comedian and British job thief Dana Alexander is back with her fourth Edinburgh Show. Since immigrating to Britain over four years ago and touring in nearly 30 countries Miss Alexander has amassed a healthy amount of tales from around the world. Watching the explosion of nationalism compete with globalisation, all the while wondering if we can find a common ground. Why can't I go anywhere on planet earth without someone asking me where I am from? And why is black face still acceptable in Holland.