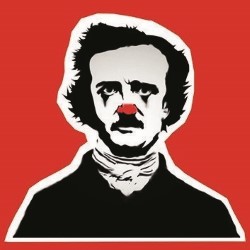 Come take a trip beneath the floorboards, find the source of that itching in your wig, and avoid that letter. A deliciously dark, sumptuously savage horror extravaganza. Don't miss your chance to experience the once in a lifetime pairing of Sigmund Freud and Edgar Allan Poe as they escort you through a vaudeville maze of haunted sagas. Poe and Freud have it all: from classic séance chills to lesser-known tarantula tales, and they're taking you with them into the darkness... Winner of the Clive Barker Award and Lord Rootes Memorial Fund Award.

Join Sigmund Freud and Edgar Allan Poe as they escort you through a vaudeville maze of haunted sagas.

Spend the afternoon accompanying Clown Funeral on a bewitching journey through Mr Poe's Legendarium. Edgar Allan Poe, with a little help from Sigmund Freud and his crew of strange storytellers, acts as your host for the evening, telling troubling tales of torturous tarantulas, chilling chain letters and an unsettling séance. Gripping stories, famous literary faces and grotesque physical theatre - what more could you wish for?

Combining gothic imagery and environments with contemporary urban legends, this original devised show explores how Victorian anxieties manifest themselves in modern society. With inspiration taken from Poe's very own pages, the show is split between three Goth-ified stories and the Legendarium itself, creating a hybrid of fast-paced, surreal comedy, and subtle, unnerving storytelling.

Clown Funeral is an emerging theatre company based in the West Midlands. Combining clowning, storytelling and physical theatre, Clown Funeral are committed to devising dark and surreal shows from unusual stimuli. They have performed a number of shows as a collective at Warwick University (the birthplace of companies such as Curious Directive, FellSwoop Theatre and Barrel Organ), and this is their first time performing in Edinburgh.