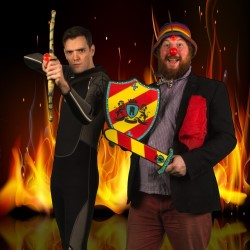 A non-stop hour of nonsensical family fun from madcap double act Chris and Cammy. Jump into the action and play a part in a sketch, or just sit back and let others make fools of themselves. Expect clowning, comedy, singalongs and slapstick from two of Scotland's top comedic performers. Chris Forbes has performed comedy all over the world and stars in BBC Scotland's Scot Squad. Cammy Sinclair performs clown in hospitals across Scotland and people die laughing. A right good laugh.