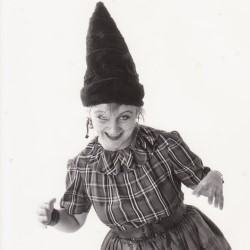 Once upon a time, in the olden 1980's days, when Left was Right, and The Goodies had to stand alone against the tyranny of Margaret Thatcher armed only with only an Arts Council Grant and a brace of juggling clubs, then truly, Comedy was Alternative.

Forged from these revolutionary fires came some of the finest comedians of their generation, plus Charmian. Some of them are now on your telly, some faded away into insanity; but with a career spanning 1984 to the present day, Charmian continues to happily tread a space somewhere in between.

Now she tells all in a new show, When Comedy Was Alternative (The Laughs And Loves Of A She-Comic), packed with jokes and stories - her first open spot in the bear-pit of the notorious Tunnel Club, the death-threat heckling, Frank Skinner's first avocado, a doomed love affair with Tinky Winky, and a compulsory drugs hell.

When Comedy Was Alternative looks at a time when people really believed Comedy had the power to change how we think and live. And shows how even if comedy can't save the world, it can save the girl.