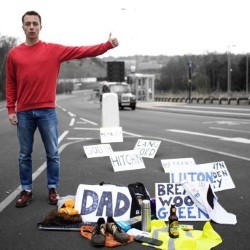 A one-man show about love, loss, and motorways. Join writer/performer and UK poetry slam champion Ben Norris as he battles the country's most notorious service stations, and the perils of lower-league football, in search of the man who became his father. In turn hilarious and moving, the show explores the relative merits of Travelodge while asking searching questions of identity. 'A more capable storyteller would be hard to find' (Tab.co.uk). 'Accessible and arresting - never at the cost of complexity and depth - Norris combines poignancy and comedy, the colloquial and the poetic' (ApplesAndSnakes.org).

"Everyone's dad exists as a kind of statue, frozen in a certain pose. Mine is wearing his cream and black mac, standing in the rain watching football or cross country... it doesn't matter which: it was muddy, and he was there."

The Hitchhiker's Guide to the Family (winner of the 2015 IdeasTap Underbelly Award) is a one-man show about love, loss and motorways. Join writer-performer and UK poetry slam champion Ben Norris as he battles the country's most notorious service stations and the perils of lower-league football in search of his father's story. Hilarious and moving, the show explores the relative merits of Travelodge while asking searching questions about identity.

"The Hitchhiker's Guide to the Family is about my dad and me", commented Ben Norris, "and the laughably little we have in common. We are such different men and the nature of our relationship (or lack thereof) has always fascinated me. So just over three years ago, on a train home from a spoken-word gig, I started writing. I wrote about the few things we do have in common, and the handful of times (at that point, specifically two) I'd felt really connected to him."

Ben's father was born in London, moved to Welwyn Garden City, to Breachwood Green, to Langford, and finally to Nottingham - always moving north and always loosely in line with the M1. Ben's hitchhike began in Nottingham (where his father still lives) and went south, stopping off at every place his dad had ever lived and speaking to everyone he had ever known (perhaps a bit ambitious!).

The Hitchhiker's Guide to the Family is a pilgrimage based on shared experience and soundtracked by Gerry Rafferty. Hitch a ride and discover the wealth of characters and personalities Ben met along the way.

Ben is an actor, writer and spoken-word artist. He studied Creative Writing at the University of Birmingham before training at the Royal Welsh College of Music and Drama. He was the 2013 UK All-Stars Poetry Slam Champion, and regularly performs spoken-word at festivals and major venues across the country, recently at the BBC Proms, Latitude Festival, the Royal Festival Hall, Cheltenham Literature Festival, and Ronnie Scott's.

He has been commissioned by the Southbank Centre and IdeasTap, and had his work broadcast on BBC Radio 3. His first pamphlet of poems was published by Nasty Little Press in 2014, and his plays have been staged at Leicester Curve, Theatre 503, and the University of Birmingham. Acting credits include work with the National Theatre and Frantic Assembly.

The Hitchhiker's Guide to the Family is his debut one-man show, and was the winner of the 2015 IdeasTap Underbelly Award.