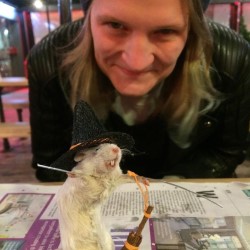 Stand-up show / storytelling performed on the following days in August 2015...

Meet Bella Younger. She's very posh, doesn't sound nearly as Scottish as she ought to and is trying to shake off her roots once and for all. She's moved to Hackney and joined the Labour party but the only problem is, she's part of a notorious Tory dynasty and she sounds like the Queen - if the Queen lived under a bridge and once accidentally took crystal meth. This is a show about the politics of family when your family is in politics and you find yourself on the wrong side of the picket line...

Rising star Bella Younger has had a whirlwind year in 2015; alongside the development of her one-woman stand-up show, she is also responsible for the viral instagram hit 'Deliciously Stella'. For anyone tired of hearing about kale smoothies and clean living yoga, this parody account of The Daily Telegraph columnist, 'Deliciously Ella' has gained her celebrity fans and press coverage ranging from OK! To The Debrief and Independent on Sunday.