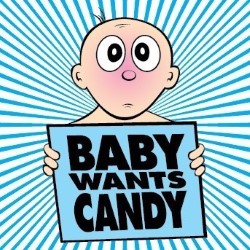 One of the best known, longest running and most celebrated improv shows in the world. With runs in NYC, Chicago and international touring, Baby Wants Candy has performed over 2,500 completely improvised musicals, and has spawned the careers of top comedic actors and writers in the US. Based on an audience suggestion, the show is a roller-coaster ride of spontaneously choreographed dance numbers, rhyming verses and witty, jaw-dropping comedy. 'An entertainment phenomenon!' ***** (Scotsman). Critics' Pick (New York Times). ***** (WhatsOnStage.com). ***** (BritishTheatreGuide.info). ***** (BroadwayBaby.com).

One of the most electrifying and most celebrated improv extravaganzas in the world returns to the Fringe this summer with yet another explosive hour of hilarious ad-libbing song and dance.

Baby Wants Candy has fast established themselves as one of the longest running improv troupes, constantly selling out runs in New York, Chicago and LA and performing in total over 2,500 completely improvised musicals. It has launched the careers of top comedic actors and writers in the US, from Craig Cackowski (Curb Your Enthusiasm, Arrested Development) to Jack McBrayer (Kenneth in 30 Rock), Vanessa Bayer and Aidy Bryant (Saturday Night Live), Thomas Middleditch (HBO's Silicon Valley) and Peter Gwinn (Comedy Central's The Colbert Report).

Entirely based on audience suggestion and accompanied by a full band, the show is a roller-coaster ride of spontaneously choreographed dance numbers, rhyming verses and witty, jaw-dropping comedy!

[l]Baby Wants Candy[l] will also be performing two extra shows, Improv All Star Explosion, promising an extra chance to delight in their spontaneous music, monologues, mayhem and hilariously insane fun, with special guests to be announced.