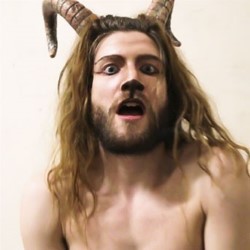 Think the pied piper... on acid... in heels... A multi-dimensional light-being on a mission of love and pleasure - would like to take you higher than the mortal man can measure. On a seething, soaring, flying, flipping, magic road ahead: He'll take you on a journey if you're happy to be led. Fusing mythical storytelling, immersive theatre and ecstatic dance. Follow The Faun on a shamagical journey to another dimension! Guaranteed to move your body, blow your mind, open your heart and tickle your fancy! 'Ludicrous, giddy and strangely intoxicating' (Matt Trueman, WhatsOnStage.com).

The Faun is an ancient archetype who taps into our wild nature, horniness and primal desire to dance. He is the Pied Pier... on acid... in heels.

For 26 shows back-to-back from the 6-31 August, Spotlites at the Merchants' Hall will become the magical grove of the Faun and his followers.

Director Molly Molloy began her career with the American Ballet Theatre before moving to Paris in 1974, where she founded the Molly Molloy Dance Company and began choreographing for Paradis Latin. She was the original choreographer of Chess: the Musical, taught at the Paris Opera Ballet School and trained a number of dance stars in the Molly Molloy technique, including West End director and TV judge, Arlene Phillips. Molly has worked with Andy Black since 2012, bringing her decades of experience to nurture an exciting new musical theatre talent.

Performer Andy Black trained at GSA Conservatoire and worked in West End musical theatre, before performing as the Faun for thousands at festivals across the UK, including Glastonbury, Secret Garden Party, Shambala and Morning Gloryville. The Faun draws on these two worlds to create a new theatrical space, where ravers and clubbers meet traditional audiences for interactive storytelling and dance floor fun.

Follow the Faun was first produced as part of the Artful Badger's Wild Worlds: Darksides, which won the "Spirit of The Festival Award" at The Vaults Festival 2015. After a string of shows in London during September, Follow the Faun will be frolicking to Australia and New Zealand in early 2016.