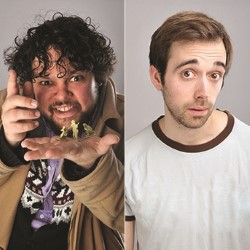 The two best ones from The Beta Males, John Henry Falle, 'bearded force of nature' (Guardian) and Richard Soames, 'simultaneously adorable and hilarious' (SpoonfedBlog.com) present an hour of storytelling. Be transported as The Storybeast takes you into his cave for some myths, before Richard takes you out of that cave and performs characters that will make you laugh and cry. Expect terrifying rituals and warm tea. Praise for The Beta Males: 'Genius' (Sunday Times). 'One of the most exciting acts out there' **** (Time Out). 'A furnace of invention' **** (Chortle.co.uk).