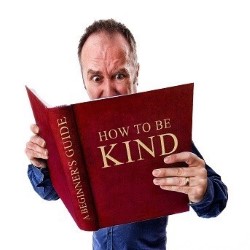 Award-winning comedian and failed Buddhist monk Sam Brady explores his ongoing struggle to be a good person and asks why kindness is so undervalued. Join Sam for an hour of heart-warming, thought-provoking, soul-searching comedy. 'Naturally funny and charismatic ... hilarious anecdotes that drove home his point that even though humans are flawed, little acts of kindness really do make a difference... Emotional and uplifting' (ThreeWeeks). 'Life presented in its true form with highs and lows and much self-deprecating laughter throughout... Go see for yourself and maybe feel a little less cynical about life' (BroadwayBaby.com).

Ever been hopelessly looking for something, and failing, only to eventually find it right under your nose? Well that's exactly what Sam Brady did, except the thing the thing he sought - or rather the answer he searched for - turned out to be a life-changing moment in the simplest of acts.

In Kindness, Sam tells the story of he gave up everything in his quest for meaning, leaving his old life behind to become a Buddhist monk in an attempt to transform his consciousness and transcend his ego. After four years, however, he found he hadn't changed at all. Naturally, he reached a very low point in his life - perhaps the lowest. And then, one day, he received a tiny act of kindness from an unexpected source. Realising a moment of compassion could change another person's life forever, his faith in human nature was restored and the result - which he wants to share of course - is a funny, thoughtful and uplifting show.

So what was this act of kindness? Well there's only one way to find out, and in the process enjoy an exploration of what kindness is, why we find it so difficult and what - if anything - it means to be "a good person".

Describing himself as a 'failed Buddhist', Warrington-based Sam Brady has performed at a number of notable venues such as The Comedy Store and Manchester's Frog & Bucket, and MC'd at corporate events at Birmingham's NEC and Old Trafford, MUFC's home. Following on from his show Meditation Ruined My Life, 2014 sees an Edinburgh return for Kindness as well as a national tour for the show before the festival begins in the summer.