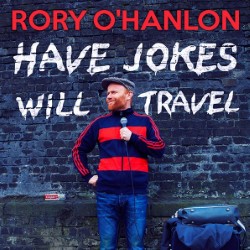 Strap in, it's joke time. Come join one of the rising stars of Irish and UK comedy, Rory O'Hanlon, in this hilarious hour of non-stop gags. Known for his machine gun style of joke telling, this new show of brilliant observational stand up will have you rolling in the aisles. 'A joke every 30 seconds' (Times). 'Smart, funny, and charming' (Skinny). 'Truthful and entertaining' (ThreeWeeks). **** (One4Review.co.uk).