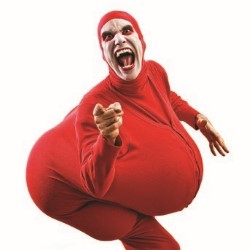 Something interesting must happen every 10 seconds... and it will. The bastard returns following 10 five-star reviews for his infamous 2013 Edinburgh debut. Experience the madness as this dangerous, seductive comedy monster immerses you in his unique and absurdly interactive masterclass. Anything can happen as Red Bastard lures his students into raw conversation, traps, rewards, and catch-22s. Top 5 shows 2013 ***** (List). Top 10 most memorable shows 2013 **** (Chortle.co.uk). 'Jaw dropping... irresistible... the audience was taken on the ride of their lives' ***** (Scotsman). 'Once-in-a-lifetime experience... has to be remembered.' ***** (Skinny). 'Hilarious' (Time Out).

Red Bastard is a dangerous, seductive comedy monster! After a plethora of 5-star reviews for his debut at last years Edinburgh Festival, America's number one bouffoon unleashes a pompous theatrical master class in this critically acclaimed show once more, with a return season to the festival for the full month, this time appearing at the Pleasance Courtyard - Forth. Prior to this he will be taking his show for 8 nights at London's Pleasance Theatre in the main room from 29th April to 6th May as well as taking in 5 nights at Brighton's Komedia from 16th - 20th May and a handful of dates around the country.

Experience this exquisite monstrosity as he delicately leads you through a no-holds-barred show demanding to know nothing less than the existential query, "Who the hell do you think you are?" Lines will be crossed and laughs will be had in this interactive feast of biting wit, mischievous improvisation, and physical prowess.

He is not man or woman; he is not human or animal. He has come to play with us, pretending that he is a teacher of the theater of life. Red Bastard spreads throughout the audience like a big red virus, daring us to impress him with beautiful movements and vocal exercises of our own. He demands that we be "bigger," that we "go beyond." He commands, "risk, and you are rewarded." The audience finds itself changing seats, yelling, posing, singing-we are pulled into participating, and the consequences of not participating ("eek! he might touch me!") feel delightfully dire.

Audiences should be prepared for anything to happen in this interactive show, in which Red Bastard engages the audience in master class of raw conversation, provocations, traps, rewards, and catch 22's - encouraging risk and personal discovery.

Red Bastard is Eric Davis. In 2011, he created the role of Allen Smithee in Cirque Du Soleil's Resident Hollywood show, Iris. In 2010, Mr. Davis won the Golden Nose for Clown of the Year in New York. In addition, he was a Finalist for the NY Comedy Festival's Andy Kaufman Award, and the award winning director and co-writer of The Bouffon Glass Menajoree, which was nominated, for Outstanding Director, Outstanding Script, Outstanding Ensemble and Outstanding Production by the NY Innovative Theatre Awards. He is the co-writer and director of Kill Me Loudly: A Clown Noir. And a co-founder of the NY Clown Theatre Festival. The show has been created under the direction of Sue Morrison with continued direction by Deanna Fleysher.