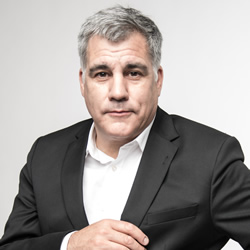 Be prepared. Lewis Schaffer isn't. An hour of your life you'll never get back. A lifetime of his completely wasted. Star of Resonance FM's Nunhead American Radio. 'Disconcertingly terrific. Compelling, unique and most of all unpredictable' (Bruce Dessau, BeyondtheJoke.co.uk). 'An hilarious, cathartic, exhilaratingly appalling experience' **** (Kate Copstick, Scotsman). 'The logical conclusion of all stand-up comedy' (Daniel Kitson). 'A skilled, masterful and above-all, eye-wateringly funny guy. If you consciously choose not to see him, don't bother coming to the Fringe' **** (Chortle.co.uk). 'Unlike anything else on the comedy circuit.' (Time Out). www.pay-what-you-want.info

My Edinburgh Festival Fringe show for 2014 is called Success Is Not An Option. My show will not be a success because:

1. I'm using the same business model as last year, which didn't work. Under the Heroes of the Fringe "Pay What You Want" model, punters can pay £5 for tickets in advance or come in free at the door which makes absolutely no sense. As of today, I have sold nine tickets. Nine.

2. Most reviewers don't like to go to free shows because they cannot be guaranteed a seat, and that can mess up their viewing schedule. And they don't get something that regular people are paying for for nothing, which is the whole point of being a reviewer.
??
3. This is my seventh consecutive year at the Fringe and I have gained zero traction. 22 years in comedy and I am still doing these poncy shows in dingy subterranean bars.

4. There is always some American comic nobody has ever heard of riding into town, selling out every night and then leaving the country once the festival is over. Leaving is always sexy. My ex used to tell me "You used to chase me!" and I'd say, "You used to run?.?" I've stopped running. I'm not leaving the UK. I am stuck here with a knackered act, two kids, and nobody chasing me.

5. You could have seen me in London where I do a weekly show at the Leicester Square Theatre and two free shows a week at ?The Rancho Grill at any point over the past five years, but you haven't, and I know you haven't, so you're not going to make me a success in Edinburgh either.

7. I have waited until three weeks before the festival to send out a press release, and have no promotional budget to pay a PR to tell me that this level of self-flagellation in a press release is a terrible idea.