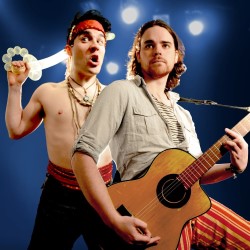 Formed of brothers Tommy and Ed, Jollyboat performances are characterised by high energy, a fast gag rate, and a real connection to the audience.

A smash hit at music festivals (Glastonbury, Download, T in the Park, Bennicassim, Hop Farm, and others) and an underground Edinburgh Fringe treasure, Jollyboat's Edinburgh shows are regularly full, with many fans returning year after year.

Now, having just moved to London, they are headlining comedy clubs nationwide, and their career is exploding into the likes of the Comedy Store, Highlight and Jongleurs. See them now, before they really break through!