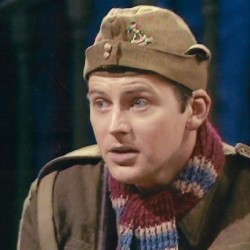 ...but maybe he will! Enjoy an afternoon with Ian 'Stupid Boy' Lavender in conversation with Edinburgh's Steven McNicoll. Dad's Army was Ian's first professional job and he found himself thrown into a group of some of the best and funniest actors in the business. Dad's Army became one of the most popular and iconic television programmes on the BBC with a following which included Her Majesty Queen Elizabeth, the Queen Mother in her Scottish eyrie, who weekly delayed evening dinner to watch. Your questions welcomed and answered with truth and humour and accompanying visual clips.