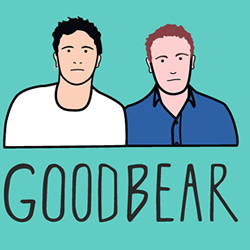 A brand new sketch comedy double act from Joe Barnes and Henry Perryment. Directed by George Chilcott ('Ingenious direction', The Sunday Times) and accompanied by an original score by Max Perryment. ***** The Scribe, **** Broadway Baby, 'one of the most slickly choreographed sketch shows at the Fringe', The List.

Goodbear is a brand new sketch comedy double act written and performed by Joe Barnes and Henry Perryment. Directed by George Chilcott and accompanied by an original score by Max Perryment, Goodbear is a fast paced, cinematic show where the performers move between different characters and sketches in the blink of an eye.

Joe Barnes: Joe Barnes was the President of the award winning Leeds Tealights, National Student's 'Best Student Sketch Group'. He is one third of a new sketch comedy show Minor Delays (alongside former Cambridge Footlight Presidents Harry Michell and Abi Tedder) and has performed internationally and across the UK as a storyteller for the Roald Dahl Museum.

Henry Perryment: Henry Perryment has also performed across the country with the Leeds Tealights for the last two years. He is a member of the award winning Dugout Theatre and part of both the 5* Edinburgh show Bouncers Remix in 2011 and Inheritance Blues in 2012 which had a sell out run and was nominated for The Stage Student Choice Award. He is a regular on the London stand-up circuit and has performed in such shows as the Comedy Store's 'Best in Standup'.