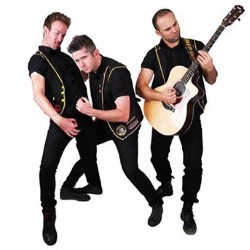 Music performed on the following days in August 2014...

After sold out shows around Australia SUNS of FRED are bringing their show Excited!!! to Edinburgh for the first time! Three aussie boys with an exciting, fast-paced show, coated with melodious harmonies that will leave you wanting more! 'Next gigantic thing!' (Tim Ferguson, DAAS). 'Will leave your brain guessing and your eyes laughing with tears' **** (Rip It Up). **** (Adelaide Advertiser). Next Generation Award at Perth International Comedy.