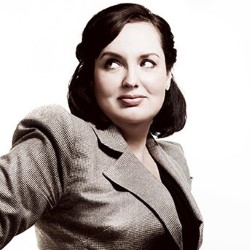 Comedian Deborah Frances-White was adopted as a newborn baby. In late 2012, she stumbled across some information about her birth mother and went on a round the clock treasure hunt, drawn into her past like a magnet. This is her true story. Turns out you can't open half a can of worms. 'Gripping and compelling... Hilarious and heartbreaking' (Guardian). 'Gloriously talented!' (Time Out).

Comedian Deborah Frances-White was adopted when she was only ten days old. Until late 2012, she knew nothing about her birth family. Then she stumbled across some information that led her to embark on a round-the-clock treasure hunt, drawn into her past like a magnet. This is her true story. Turns out, you can't open half a can of worms!

Armed with only her birth mother's maiden name, Deborah turned internet detective to track her down. At first Deborah said 'I just wanted to look' I wasn't at all sure I wanted to contact anybody. I wanted to see who they were and what they looked like.' But, her curiosity soon became a compulsion as she delved into the online worlds of Google, ancestry.com, Facebook, Pinterest and YouTube.

There is no doubt that this quest was a gamble - full of false leads, hilarious disappointments, hysterical revelations and, most importantly, the consequences of her discoveries. When Deborah finally made contact with her birth mother, she exposed a part of the past that had been hidden for decades.

Half a Can of Worms is a raw and emotional show, by turns hilarious and heartbreaking (The Guardian). Discover Deborah's mysterious past, inspirational present and inevitable future as her story unfolds.

Deborah will also be bringing back her hit late night improv show Voices in Your Head, each weekend at the Gilded Balloon, with a host of special guests.