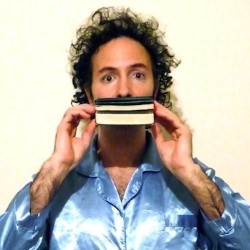 Preaching from a book he never read, Vitamin turns into many characters, creatures and things, including a dancer, a marathon runner and a caterpillar. Playing with your imagination, and with unconventional uses of live accordion, making 'inexplicably wonderful comic theatre' ***** (BroadwayBaby.com). A strikingly simple and extreme piece of physical comedy. 'Don't miss it' ***** (Prague TV). 'A contemporary clown full of vitality and inventive insanity' (ThreeWeeks). 'Hysterically funny' (MalaysiaTravelNews.com).

There aren't many shows that sell out a run at the Soho Theatre main space simply by word of mouth and with virtually no press or marketing, but this is exactly what Vitamin did in June 2013.

In fact - word of mouth has been so strong that Vitamin has sold out every time it has been shown for more than one day in countries all over the world, including London Soho Theatre, a 2012 run at the Edinburgh Fringe - and other venues in Austria, Croatia, Czech Republic, France, Italy and Malaysia.

Preaching from a book he never read, he transforms himself into many characters, creatures and things, from a captain to a dancer, a marathon runner, an accordionist, a caterpillar...

Created in cabarets and variety shows across Europe, Vitamin is an internationally acclaimed physical comedy that combines different styles of contemporary comic theatre into a hilarious and moving performance. It plays with our imagination in fun and surprising ways, through mime, storytelling, dance, puppetry, and the unconventional use of live accordion.

In this physical and musical performance, our host Carlo Jaucci takes us to a fantastic world where inanimate objects are injected with vitality and the normal world becomes a lot less normal. Here he shows us completely unrelated but consistently brilliant sketches that range from the bizarre - 'The Saddest Song in the World' - to the sublime: the existential caterpillar.

A visually inspiring solo show, Vitamin is created and performed by Philippe Gaulier trained clown Carlo Jacucci, with a free and spectacular imagination and an incisive physical language.

Carlo Jacucci trained at École Philippe Gaulier, where he has taught three months a year since 2011. Founder of Artimmediate (2003), with whom he devised and toured internationally seven solo and collective shows, including Baitman, Beesquit, L'Accordeon-eon-eon, Boxette and Losing Venice, Carlo has been employed as actor and clown by many companies, circuses and theatres, including the Théâtre de l'Opprimé of Paris (2002-05) directed by Rui Frati, with whom he performed all over Europe and in Burundi.