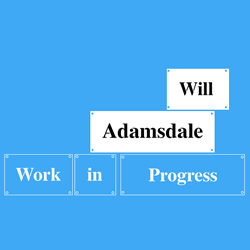 Stand-up show starring Will Adamsdale performed on the following days in August 2013...

Hello my name is Will Adamsdale and I am a man who occasionally stands up and talks in front of other people. Sometimes I move about! (but I rarely dance). Come and see me do these things in a work-in-progress show that - at its heart - attempts to answer some key questions- are box sets too good? how does one leave a room? do squirrels roar? why did we take the shit they told us about cds? and why must I worry so?

Following his widely reported back injury that saw him laid up for 6 days, Will Adamsdale has literally bounced back.

Will came to the Fringe fresh from his hit show Victorian in the Wall at the Royal Court, but then put his back out rehearsing High Tide's production of Stuart: A Life Backwards, at the Underbelly. As is the tradition, the show went on, with director Mark Rosenblatt performing the role, script in hand. Will was laid up in agony for 6 days, but like a true pro, he's back on stage fighting through the pain.