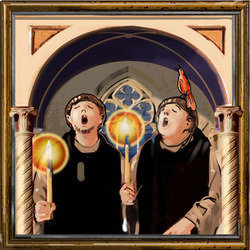 Described by enthusiastic preview audiences as Carry On meets Hilary Mantel, the show features Brett and Burrows as two monks brought back to life from statues in a 16th-century church. Playing a multitude of characters, Brother Stephen and Brother Adam fight a hilarious rearguard action against the onslaught of Henry VIII's Reformation. A fight that remains, for all its humour and theatricality, a sad story of love and loss.