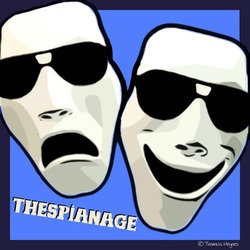 Sketch show / stand-up performed on the following days in August 2013...

Sketches. Stand-up. Character comedy. A show with a different guise each night. It's not espionage it's Thespianage! Having regularly performed with Bangor Comedy, including a show with Phill Jupitus, 400Hats bring you a hilarious, fast-paced show that changes every night depending on what you want to see! What happens when Bible characters have a quiet drink after the New Testament? Do you want to witness the first ever psycho-lol-gical experiment? Or why not just enjoy general merriment ... and his troops as they prepare for war? Don your best audience hat and come along!